On the occasion of the 30th anniversary of the ERASMUS programme, the University of Passau held an evening event in the refectory on its International Day. Around 150 international students and prospective exchange students about to study abroad were seated around different country tables and had a chance to meet students from their host country. 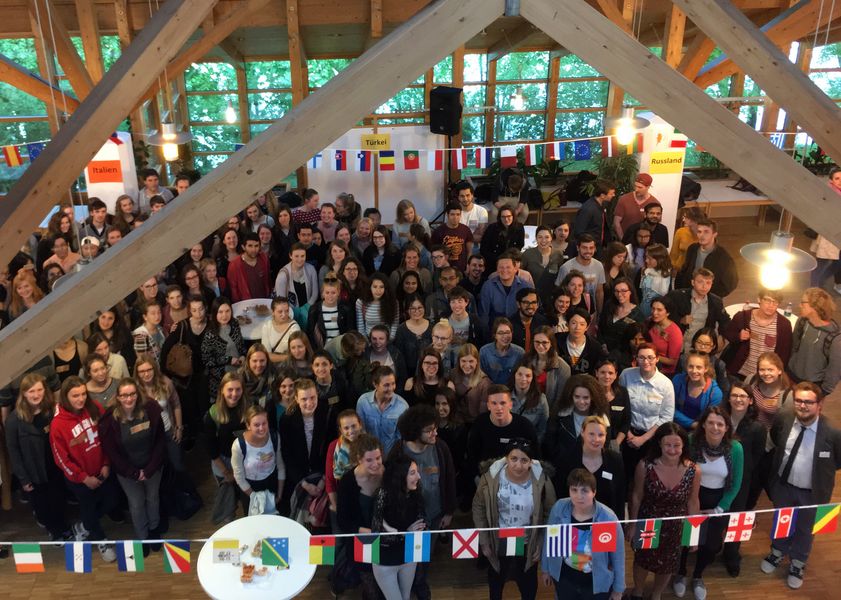 With more than 200 international partner universities for student exchanges, currently 18 international double degree programmes as well as the German-taught programmes in Russia and Hungary supported by the German Academic Exchange Service (DAAD), the University of Passau offers students a variety of opportunities to gather international experiences. Likewise, there is a steadily rising number of international exchange and degree-seeking students in Passau, and more than a third of Passau’s students spend a semester or more abroad. All in all, about ten percent of the current students at the University have a foreign passport.

The Vice President for International Relations, Ursula Reutner, moderated the event and gave an introduction summarising the thirty-year history of the ERASMUS programme. Launched in 1987, the programme quickly gained popularity: by 2002, one million students had spent part of their studies in a European partner country – a figure that rose to two million in 2009, three million in 2013 and now to 4.4 million.

At the same time, the number of exchange students at the University of Passau was increasing: ‘In the course of the last ten years, we were able to increase the number of ERASMUS students going abroad by 50 percent, and the number of students coming to Passau from other European universities by 100 percent’, said Professor Reutner, adding that the ERASMUS programme was a key instrument for bringing the European spirit to people’s everyday lives: ‘Especially in times in which the EU finds itself confronted by a variety of challenges, the ERASMUS programme has an important contribution to make to the internal cohesion of the Union. The millions of students who have spent part of their studies in another European country will always consider Europe a part of their lives, and be the most persuasive proponents of the European idea’, Vice President Reutner said.

Over the course of the evening, Passau’s students had the special opportunity to establish contact with students from their intended host country ahead of their stay. At the same time, the participating international students got to know German students interested in their home country. Tamar Giorgobiani, a Georgian student at the University, provided the music for the event.