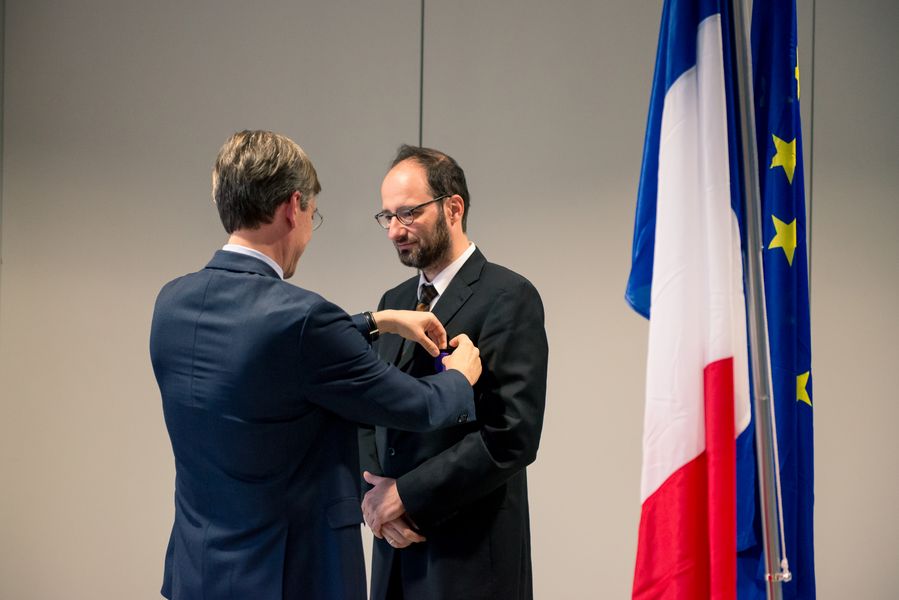 'This medal is to honour [Professor Kosch's] exceptional engagement for Franco-German co-operation', said Consul General Jean-Claude Brunet during his visit to the University. The Ordre des Palmes Académiques (Order of Academic Palms) is an order of chivalry established by Napoleon Bonaparte in 1808 and one of the highest decorations in France; it is conferred for outstanding services to French education and culture.

'This merit, to me, is an appreciation of my Franco-German activities to intensify university co-operation between the two countries and to actively promote French culture and language in Bavaria and Germany', said Harald Kosch, who has always been an advocate for France and a core Europe based on mutual understanding. In a heartfelt speech, he thanked his family and numerous colleagues from universities and networks, who have lent him support over the years and who travelled to Passau specifically for the award ceremony or followed it from abroad via Skype.

Erika Träger, the Third Mayor of the City of Passau, also congratulated Professor Kosch, saying that this award is a strong expression of appreciation for his personal efforts and that it has made the spirit of friendship between Germany and France palpable. She went on to say that Passau had a close connection with France, a strong affinity for the French language and its culture, and that Professor Kosch was always an amiable and competent partner for guests of the City. Always keen to build bridges, he has been instrumental in strengthening the bilateral partnership between both cities. In 2013, Passau celebrated the 40-year anniversary of relations with its French twin town of Cagnes-sur-mer.