On behalf of the University of Passau, Professor Thomas Riehm (Chair of German and European Private Law, Civil Procedure and Legal Theory) signed the co-operation agreement with Université Catholique de Lille (Paris – Issy-Les-Moulineaux campus). The agreement provides for staff and student exchanges under the ERASMUS framework and establishes a new binational, trilingual master's programme in business law to be studied while working. 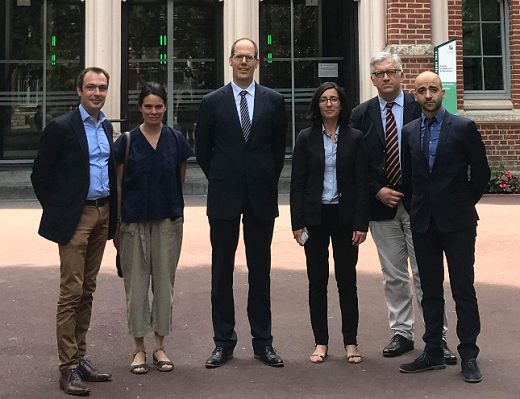 Founded in 1875, Université Catholique de Lille is the oldest private university in France. The university has five faculties and 20 écoles, grandes écoles and institutes. The student figure is approximately 30,000. The master's programme is the first trilingual Franco-German business law programme to be studied by professionals in employment. The languages of instruction will be German, English and French.

Students on the programme spend their first year at the University of Passau, where they attend courses taught in all three languages. During the semester breaks, they will complete compulsory work placements in international companies in the region. The second year is spent studying at the Paris campus of Université Catholique de Lille, in the Paris suburb of Issy-Les-Moulineaux, where each week is split evenly between study and paid employment. The tuition fees for the privately-run university are paid by the employing companies. Upon completion of the programme, the graduates are awarded a business law master's degree.

The fact that the entire degree programme is studied while in employment ensures that students are integrated into the labour market at an early stage, making for excellent employability in Franco-German economic relations.'