Since April 2016, refugees have been able to prepare specifically for studying in Germany in the ‘Refugee Programme’ at the University of Passau. Three programme participants—Ahmad Ahmad, Tarek Almahana and Alaa Ashlash—have now successfully completed their studies in Passau. The three graduates were honoured personally by Vice President, Professor Jörg Fedtke, numerous companions from the University and the region, as well as friends and families, during a ceremony. 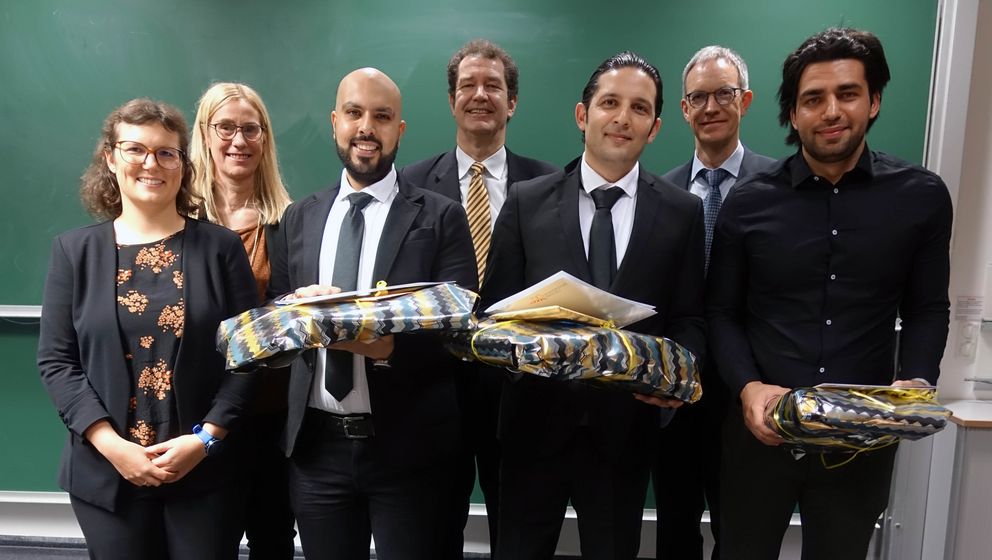 In his speech, Vice President Fedtke acknowledged the extraordinary performance of the three young men who, in the few years since their arrival in Germany, have been able to integrate not only socially but also academically and master a complete programme of study. ‘The University is proud of the success of the Refugee Programme and proud of you’, said the Vice President. ‘As an institution, the University of Passau benefits from people like you: Not only do you make a significant contribution to diversity on campus, but by your performance you also set an example for all those who will come after you.’

The fact that Ahmad, Almahana and Ashlash were indeed pioneers was also emphasised by Luise Haack, Head of International Support Services at the University of Passau: ‘They have shown great courage by following a path that no-one before them has ever taken before. You have given us, as an institution, a very important new perspective.’ She said that, within the University in particular, many academic and administrative staff have been very open-minded in their efforts to find new solutions and adapt existing processes in order to ensure the success of the programme and its participants. Another decisive factor for success was the diverse support that all participants received from their mentors, peers, friends and families.

‘Success is a wonderful feeling’, said Ahmad Ahmad in his acceptance speech. ‘But the best thing about it is that when this feeling rewards the greatest efforts and difficulties overcome—then success has a special taste.’ With patience, diligence and perseverance, a great dream has come true for him and his fellow graduates. Ahmad talked about the factors and events that were instrumental in bringing about his ‘new academic life’ at the University of Passau. He especially thanked Professor Hans-Georg Dederer, who supervised his master's thesis at the Faculty of Law.

About the Refugee Programme

The two-semester Refugee Programme includes intensive German language programmes, courses on the culture and political systems of Germany and Europe, and courses in a chosen field of study. It prepares participants for the DSH, a German language test that is often a prerequisite for enrolling in degree programmes at German universities. The Refugee Programme is financed by the German Academic Exchange Service (DAAD) using funds provided by the German Federal Ministry of Education and Research.