Two years ago, the University of Passau and the Indian Institute of Technology Madras signed an agreement to jointly train doctoral candidates and confer both the Indian PhD and the German doctoral degree. Now, Nivethitha Santhanam is the first person to graduate from this joint programme. 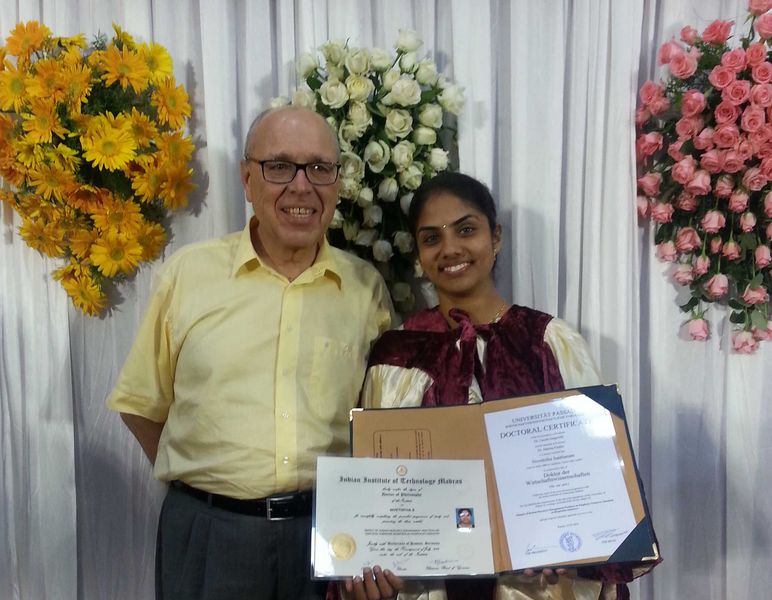 Dr Nivethitha Nathanam shows her two doctoral certificates presented to her at the convocation of IIT Madras, as a delighted Professor Hans Ziegler (University of Passau) looks on. Photo: IIT Madras

'This is likely the first time a joint German-Indian doctoral degree is conferred', enthused Professor Hans Ziegler, of the University of Passau, who has co-ordinated the bilateral exchanges between the two universities since 1995. Two further doctoral candidates from the Department of Management Studies at IIT Madras, Kurian John and Surya Karunagaran, are close to completing the joint doctoral degree programme. Just as Ms Santhanam, both received a scholarship under the ANPTI Programme of the German Academic Exchange Service (DAAD), with first German participants expected to complete the programme soon. And there are more to come: 'One of my graduate research assistants has plans to embark on this programme and another doctoral student has expressed an interest in it", said Hans Ziegler.

The joint doctoral programme with IIT Madras in Chennai, Tamil Nadu, has existed since 2014. This co-operation centres on producing world-class research in the field of business studies and economics at both IIT Madras's Department of Management Studies and the University of Passau's Faculty of Business Administration and Economics. 'This joint agreement was a significant milestone in an already highly fruitful co-operation between IIT Madras and the University of Passau', said Vice President for International Relations Ursula Reutner.

'One very fortunate and by no means guaranteed aspect of our partnership is that it works equally well in both directions', added Professor Ziegler. Every year, about ten master's students from Passau and four doctoral students from Chennai complete part of their studies at the respective partner university. The candidates are supported by the DAAD and the Bavarian-Indian Centre for Business and University Cooperation (BayIND). At the same time, it is remarkable that this co-operative partnership enjoys the active support of a large number of academics at both institutions. These research stays have already yielded a significant number of publications.