Visiting Professor Srinivasan Keshav, Cisco Professor of Smart Grid at the University of Waterloo (Canada), commenced his research visit at the University of Passau on 22 July and will stay until 5 August. As an internationally renowned expert in his field, he was invited by Professor Herrmann de Meer (Chair of Computer Networks and Computer Communications). Professor Keshav will give a public lecture on 28 July and undertake several excursions to explore how renewable energy is generated, consumed, transformed and integrated into the grid. His prime interest is in research on the energy related processes that are taking place within the region. 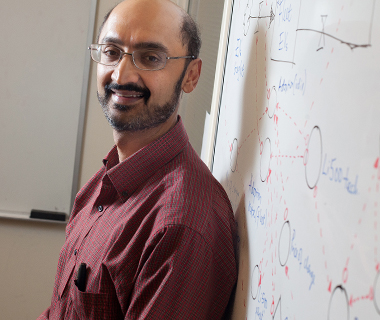 On 28 July, Professor Keshav will give a public seminar on “Energy Systems of the Future” in lecture theatre 11, Faculty of Computer Science and Mathematics building (Innstrasse 33). The seminar will be presented in English.

Academics from the University of Passau, Deggendorf Institute of Technology and the University of Applied Sciences Landshut will discuss their research on energy generation and energy systems in the region – more specifically photovoltaics, energy storage and electric vehicles – with their Canadian colleague. Another item on the agenda for Professor Keshav is a company visit to Feilmeier in Hofkirchen and UAS Landshut's energy technology centre in Ruhstorf.

"Some of the factors that undoubtedly moved Professor Keshav to join us for a research visit is Germany's role in spearheading the transition to renewable energy sources, the fact that Lower Bavaria has the world's highest proportion of photovoltaic installations, the ground-breaking projects in the region around Passau, such as the ‘e-Wald’ electric mobility project, and, of course, the University of Passau's research reputation in these fields,” said Professor Hermann de Meer, and added: "We are very pleased to have the support of the Landkreis (i.e. the administrative division of the greater Passau region), particularly the climate protection and environmental advice section, as well as our scientific partner organisations in the region in putting together the programme."

Media representatives are highly welcome to participate in the programme. Please address your media enquiries to the Media Relations Section of the University of Passau, phone: +49 0851 509 1439.

Professor Keshav holds the Cisco Chair in Smart Grid and heads one of the world's leading laboratories in this field. He is also the Chairman of ACM SIGCOMM and serves on the Steering Committee of the e-Energy Conference, which was established in 2010 by the University of Passau and has meanwhile taken place at renowned locations such as Columbia University (2011), Universidad Carlos III de Madrid (2012), UC Berkeley (2013) and the University of Cambridge (2014). He is the author of two graduate textbooks in computer networking.