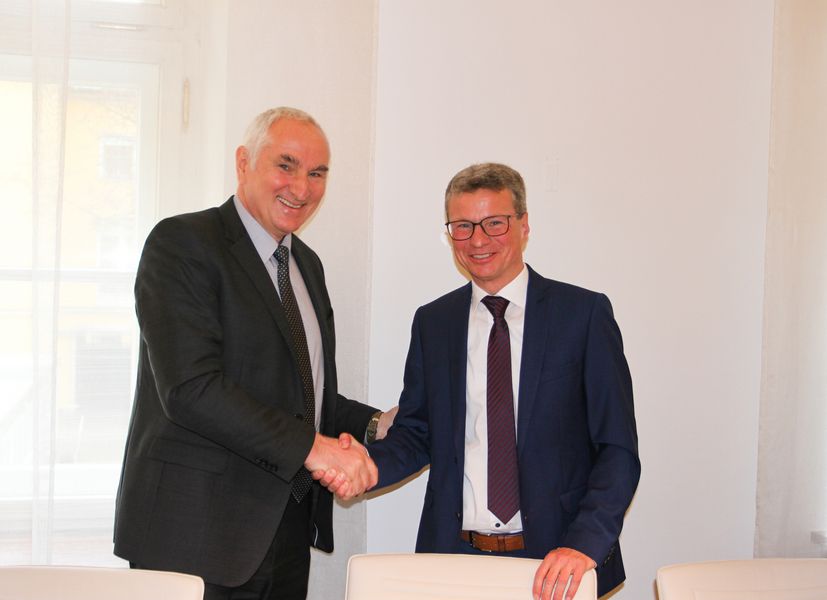 Science Minister, Bernd Sibler, presented Professor Ulrich Bartosch with the letter of appointment on 10 March. The new President of the University of Passau will take office on 1 April 2020. Photo credit: Bavarian State Ministry of Science and the Arts

In his speech on the occasion of the appointment ceremony on 12 March, the Bavarian Science Minister, Bernd Sibler, praised Professor Ulrich Bartosch for his extensive experience in a wide range of areas of university development and his strong expertise in digitalisation and the European positioning of Bavarian universities, which, he remarked, could only benefit the University of Passau ‘as a university that has made Europe one of its focal themes.’

In his acceptance speech, Ulrich Bartosch said: ‘In times of crisis, but still with great confidence and joy, I am entering the community of the University of Passau. Together, we will first set about constructively and innovatively planning the coming summer semester. The pandemic may force its own rules on us, but in doing so we seek to usher in the time after corona. I ask for the support of all members of the university and their companions near and far. Through appreciative, trusting cooperation and open, respectful discourse, we will continue to develop the University of Passau as a place of excellent research and inspiring teaching. We will strengthen the University’s regional and international networks. In close cooperation with students and teachers, we will strengthen our core themes of Europe, sustainability and digitalisation. And we will succeed with the support of our professional administration!’

Ulrich Bartosch, who hails from Regensburg, became Professor of Education at the Catholic University of Eichstätt-Ingolstadt in 2000. He has taught as a guest lecturer at Leuphana University of Lüneburg and as a visiting professor at Kiel University of Applied Sciences. Ulrich Bartosch gained his master’s-level degrees, Diplom in Education and Magister in Political Science, at the University of Regensburg. Following this, he wrote his doctoral thesis on the history of political ideas under the supervision of Iring Fetscher and Herfired Münkler in Frankfurt am Main. Several years of work as a research associate and assistant led him to the Universities of Regensburg and Passau. He has also held leading positions in vocational rehabilitation and adult education.

He is Chairman of the Scientific Advisory Board of the Federation of German Scientists (VDW), whose executive board he previously chaired for six years (2009–15). Professor Bartosch was a member of the German Bologna Expert Team of the German Academic Exchange Service (DAAD) and Chairman of the Social Work Department Conference. For the German Rectors’ Conference (HRK), he was in charge of the revision of the German Higher Education Qualifications Framework. As a member of various ad-hoc working groups, he is active in the HRK, CHE and Stifterverband university forum on digitalisation.

A new term of office will also begin for the vice presidents of the University of Passau – Professors Christina Hansen (Teaching, Studies and Diversity), Robert Obermaier (Research and Knowledge Transfer), Dennis Solomon (International Affairs and European Focus) and Harald Kosch (Academic Infrastructure/IT and Digitalisation) – and Professor Werner Gamerith (Commissioner for Quality Assurance, System Accreditation and Sustainability). Together with President Bartosch and Head of Administration, Dr Achim Dilling, they will form the University Executive for the next three years.