The University of Passau is about to deepen its teaching and research partnership with Beijing Foreign Studies University (BFSU). Passau's Vice President for International Relations, Professor Ursula Reutner, signed the agreement during a recent delegation visit to BFSU. 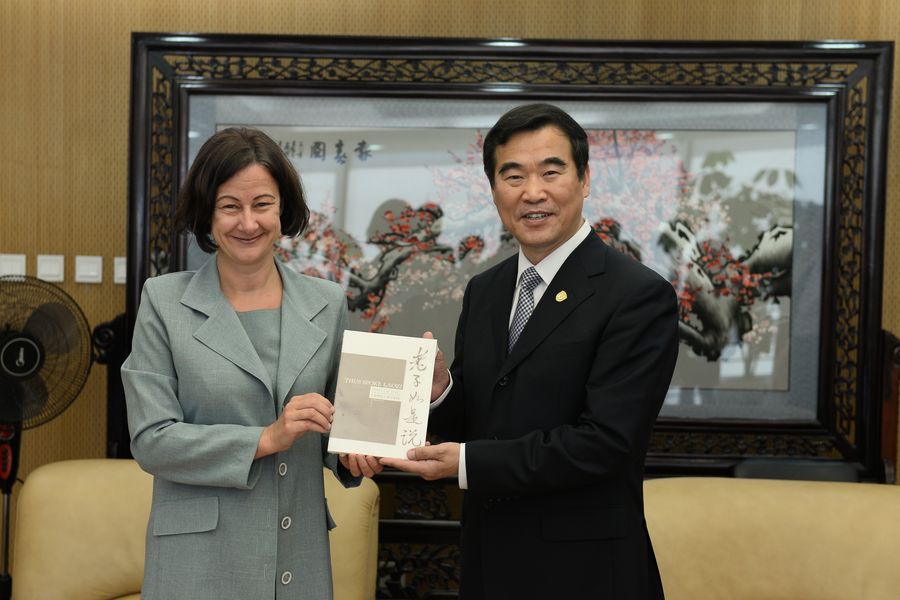 Offering more than 60 foreign language and culture programmes, BFSU is one of China's leading universities. Many of its graduates traditionally go on to work in the Chinese diplomatic service. 'This university, small as it may be by Chinese standards, takes top scores in numerous university league tables and has a profile that makes it a perfect match for the University of Passau,' said President Burkhard Freitag.

Three faculties at both universities are now in contact with each other – Passau's Faculty of Law is engaged in close cooperation with BFSU's School of Law, while students enrolled in one of the programmes offered by the Faculty of Business Administration and Economics now have the option of enrolling in BFSU's International School of Business for a semester to complete the Chinese Business Studies certificate programme. This short-term programme is taught in English, and its students hail from all over the world. Last but not least, students enrolled at the Faculty of Arts and Humanities have the opportunity to study Chinese language and culture at the School of Chinese Language and Literature at all levels for one academic year. Tuition fees are waived under the exchange agreement, and the programme includes excursions in and outside the region. At the same time, Chinese students enrolled in a German language and culture programme can come to the University of Passau to complete their third year of studies here.

Strengthening this partnership is an important step in the internationalisation strategy of the University of Passau, as China is not only an economic powerhouse but an increasingly important region for German universities. Chinese students already constitute the largest single group of international students in the German higher education sector, having more than doubled in number since 2001. Beijing Foreign Studies University is keen to motivate more of its students to go abroad for part of their studies. 'For the University of Passau it is important to attract the best and brightest,' said Vice President Ursula Reutner. 'These are very diligent and interested students, who will clearly enrich our campus scene enormously.' The partnership also promises to be fruitful in the research arena, particularly in areas such as communication, marketing and international law.

But before that, there is some explaining to do. 'Pa Shao', as Passau is called in Chinese, is not very well known in China. 'In a country whose people are accustomed to thinking in terms of billions – the Beijing conurbation alone counts 21 million inhabitants – and where cities with a population of three million are considered small, Passau would be a mere village,' said Vice President Reutner. However, small can be advantageous, as is reflected in Passau's excellent staff-student ratio and short distances; the fact that the student community makes up one-fifth of the town's populace ensures that there is a very lively student scene, both on and off-campus.

One thing was clear after the presentation at BFSU in Beijing, which included showing a film introducing Passau and its university, as well as a question and answer session: students attending the presentation were beginning to picture themselves strolling through our verdant campus, making friends and learning about German and Bavarian culture; for many, a dream was beginning to form. In closing, Ursula Reutner said: 'We hope that you will act upon your dream and that we can soon welcome you on our campus!'