Ulrike Müßig, Legal Historian at the University of Passau, will be awarded an ERC Advanced Grant (grant agreement no. 339529) from the EU's 7th Framework Programme for Research and Technological Development. This is the first time the highest academic recognition in Europe goes out to a female legal scholar in Germany, and a first for the University of Passau. 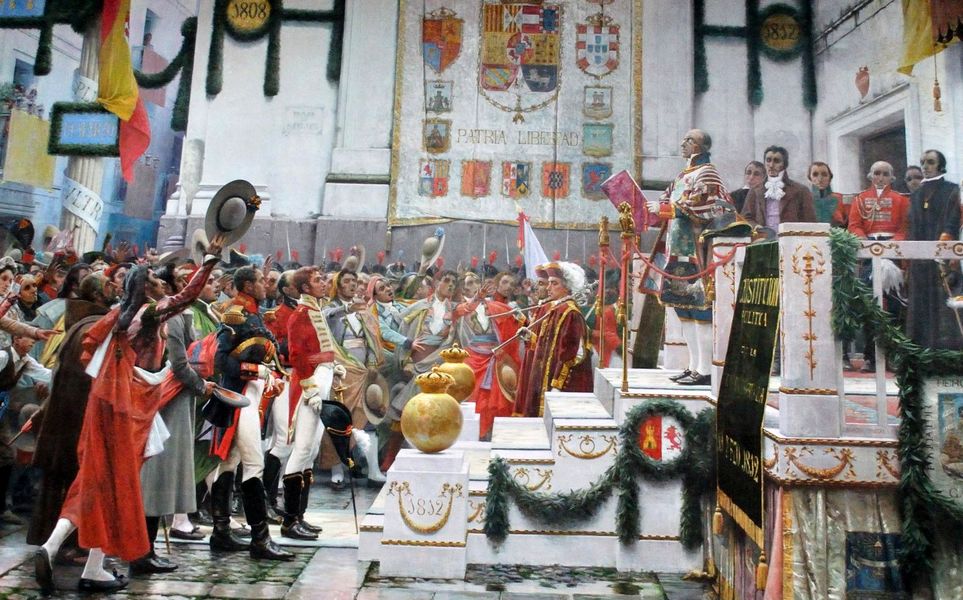 Las Cortes de Cádiz, the constitutional assembly in Cádiz from 1810-13, was a key event in Spanish legal history. Painting by Salvador Viniegra, 1812.

As part of the ReConFort project (Reconsidering Constitutional Formation, Constitutional Communication by Drafting, Practice and Interpretation in 18th and 19th Century Europe), postdoctoral academics from Belgium, Germany, Italy, Poland and Spain will conduct research on European constitutional history under the leadership of Professor Ulrike Müßig of the University of Passau. “By granting this award, the European Research Council highlights the research output of the Faculty of Law,” said Professor Burkhard Freitag, President of the University of Passau. “This is highly significant for our University, particularly in view of our endeavours to increase our international visibility as a place of science which produces world-class research.” The University Directorate, colleagues, the chair and the Research Services Division in cooperation with the Bavarian Research Alliance laid the foundation for Passau’s successful bid. “Above all, I am grateful to my husband and children for making me who I am today,” Professor Müßig said in closing.

The modern view of constitutional development in 18th and 19th-century Europe is based on the premise that effective rule is only possible with the consent of one’s subjects. At the same time, the balance of power within a state cannot be prescribed in fixed terms in a constitutional document, but is subject to continual changes brought about by the actions of political influencers. By adopting the view that the constitutional process is shaped to varying degrees by the social context, political realities, the constitutional text itself, as well as its interpretation, ReConFort is about to rewrite European constitutional history. Although the historic constitutional debates of nearly 200 years ago seem far away from today’s political decision-making in Europe, the fact that the constitutional process was widely debated in the public realm helped solidify the constitutional idea; this is a trait that is missing from the European Union treaties in our time. The lack of popularity of the European common currency with Europe’s citizens and the current financial crisis show that there is a limit to the legitimising power of expected economic profits and competitive advantages. Instead, to bring about lasting change, one needs common value judgments, such as those found in the common European constitutional traditions. “Europe is more than simply a market to ReConFort,” emphasises Professor Müßig, “it is a historically-grown social model.”

About the European Research Council (ERC)

The ERC was established by the European Commission to finance fundamental research and is currently financed through the 7th EU Framework Programme for Research and Technological Development. Academic excellence is the sole selection criterion for ERC-funding, as all funded projects are ground-breaking pioneering research. The ERC’s ‘Advanced Grants’ are awarded to experienced, established researchers with an outstanding track record spanning at least ten years.