Passau is located in Eastern Bavaria – the heart of Europe – between Munich, Prague and Vienna. The city, which has about 50,000 inhabitants, can look back on a 2,000-year history, including long periods in which the town developed autonomously.

Despite its small size, Passau is a fascinating place with its narrow medieval alleys, archways and picturesque houses which give the Old Town its characteristic cityscape. Many of these beautiful buildings were built in the 17th century, and some even date back to the 8th century AD, not counting the older Roman ruins at Castell Boiotro, which are even older.

On warm summer days the town centre, particularly the pedestrian zone, is busy with tourists and locals going window shopping or taking it easy in the many cafés, galleries and arts and crafts shops.

Every day at noon, visitors get treated to a church organ concert in St. Stephen's Cathedral played on the world's largest church organ.

Passau is a place where Bavarian traditions are very much observed, so get ready to watch or even participate in the traditional maypole climbing competition, attend the biannual local fair (known as the Dult), and sample the typically Bavarian cuisine in one of the many beer gardens*. Plus you get to learn a whole new language from your fellow students: Bavarian – one of the most distinctive German dialects.

How do they climb up the maypole? Maypoles – debarked and processed tree trunks that are up to 30 metres high – are traditionally put up on 1 May every year. A bell is attached at  the 15-metre mark, which the climbers have to ring. A referee records the time it takes the maypole climber to reach the bell. Climbers are allowed to use pitch or resin on their hands and feet to increase their grip on the maypole. The current record is under 10 seconds!

What is the Dult? The Dult is a fair held in May and September each year in Passau featuring lots of beer tents and fairground rides. Many go to the fair dressed in traditional Bavarian costume.

Bavarian food (aka "Brotzeit") Bavarian restaurants serve small but hearty hot and cold meals throughout the day. Typically these include such things as meats and cheeses, "Obazda" (a spread made from soft cheese, butter, salt, pepper, paprika powder and possibly other ingredients such as garlic, onions, and so on), and of course the world-famous "Weißwurst". 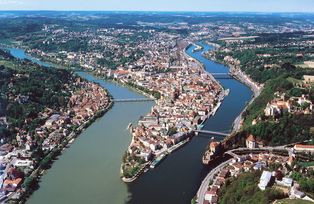 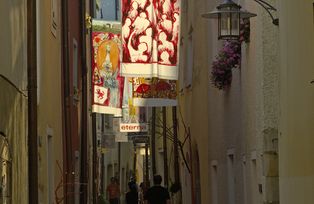 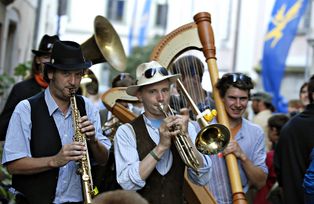 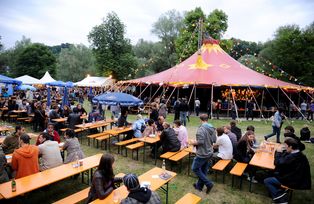 Explore the campus of the University of Passau with our 360-degree campus tour.