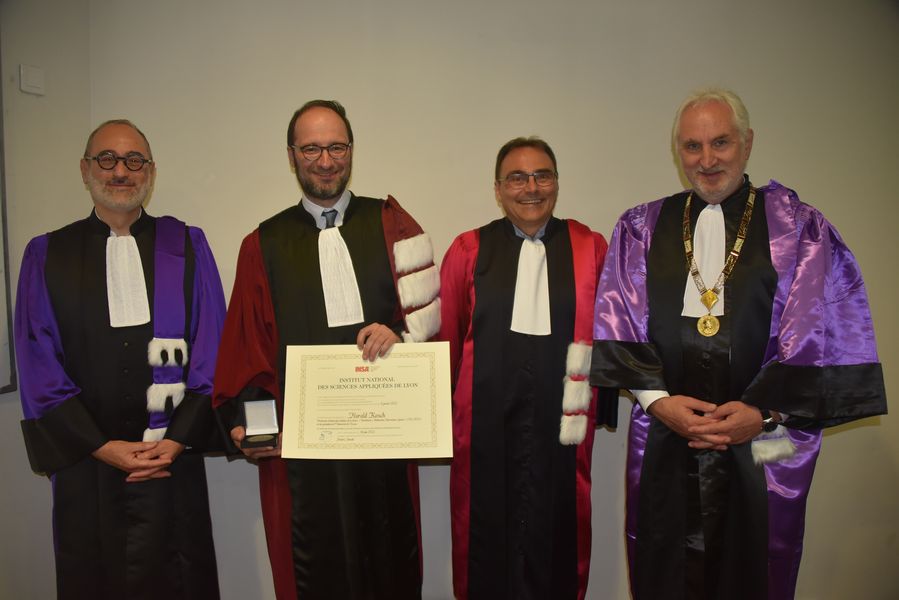 In bestowing this honour on Professor Kosch, INSA Lyon acknowledges his tremendous contributions to the French engineering school and thanks him for his strong commitment both to research and teaching as well as German-French and European cooperation. The nearly 30 years of close cooperation between Professors Harald Kosch and Lionel Brunie, Director of the Faculty of Computer Science at INSA Lyon, have helped make both universities a driving force behind numerous innovative, European scientific projects. During this time, Professor Kosch's commitment went beyond mere scientific progress in his field; deep friendships have grown between the members of both universities, leading to a strong and lasting partnership.

President Professor Ulrich Bartosch warmly congratulated Professor Harald Kosch on his work and emphasised the importance of Franco-German relations, which are at the heart of European history: "It fills me with joy and pride that, in Harald Kosch, the University of Passau has an active bridge-builder and an outstanding scholar in Franco-German cooperation among its ranks."

During the festive ceremony with numerous guests of honour from both countries, Professor Kosch gave a short lecture on relational query optimisation - one of his key research interests.

About Professor Dr. Dr. h.c. Harald Kosch
Professor Harald Kosch is Vice President for Academic Infrastructure and IT at the University of Passau and has held the Chair of Distributed Information Systems at the Faculty of Computer Science and Mathematics since 2006.

Harald Kosch is the director of the German side of the Franco-German University's doctoral programme between INSA Lyon and the University of Passau. The focus of this college are joint projects on intelligent digital systems. For his publications and international commitment, Kosch previously received the French Order of Merit - Chevalier de l'Ordre des Palmes Académiques - one of the highest accolades for services to French education.