The handbook, titled Manuel des francophonies, is the result of the first comprehensive survey of the linguistic situation in French-speaking countries according to a uniform set of criteria and following a systematic structure. The author and editor of the volume, Professor Ursula Reutner, holds the Chair of Romance Languages and Cultures at the University of Passau. 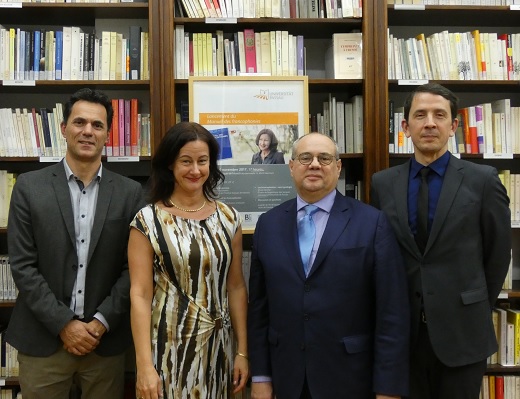 As a world language, French is spoken on five continents. Now, a professor of the University of Passau has published the first handbook offering a complete documentation of the language's distribution throughout the world. Thirty-five academics from twelve countries contributed to this detailed exposition of the status quo of the development of the French-speaking countries and regions.

Presenting research on more than thirty different francophonies in Europe, America, Africa, Asia and Oceania using a homogeneous set of criteria and uniform structure, the Manuel des francophonies lays out in detail the socio-linguistic situation of each francophony, its linguistic history and idiosyncrasies as well as the internal and external language policies it is affected by; the book also traces the differences between francophonies as well as the similarities of the development of the French language variants of Europe and of the overseas countries and regions. ‘This is the first time the term “francophony” is used in its plural form in such a survey, as France itself, with all its regional diversity, is included in the analysis of francophonies’, Professor Ursula Reutner explained.

The Manuel des francophonies was first presented to a packed audience of scholars from Germany and abroad in the blue salon of the Institut Français in Munich. Thomas Vautravers, Director of the Institut Français in Munich, welcomed the guests and praised Ursula Reutner's work as one of great importance for the promotion of French language and francophony. He went on to say that Professor Reutner had succeeded in describing the French language in all its diversity and strength, and in demonstrating the radiance of the many facets of the French language.

Pierre Lanapats, Consul General of the Republic of France, also emphasised the great significance of francophony. Saying that French is not only spoken by 270 million people in 58 countries but that francophony – as the handbook shows – is an international cultural heritage that radiates into other countries, he lauded the book for shining a light on the diversity of francophony by using an impressively coherent, systematic approach, which greatly facilitates the readers’ understanding of the individual French-speaking areas.

Following the laudatory speeches, Professor Ursula Reutner presented central theses and findings of the handbook in her lecture titled ‘Les francophonies – une typologie’, picking out three particular aspects of linguistic and cultural contact: the historical formation of francophonies by multifarious cultural interactions, language policy in the presence of co-existing languages in the French-speaking countries and regions, and finally, the ability of the French language to take on board, adapt and disseminate the lexical richness of other cultures. Exposure to other languages and cultures is thus responsible for the formation of such highly differentiated francophonies as those of Quebec, Sub-Saharan Africa and South-East Asia; it has even led to the creation of full-fledged French-based creole languages, for instance in Haiti. Naturally, the co-existence of diverse languages in the same region brings challenges for the language selection at schools, in the mass media and in public administration, which are dealt with differently from region to region. ‘Still, as the speakers shape their specific variety of French, they provide cultural enrichment of the language and contribute to its remarkable vitality’, said Ursula Reutner.