History is written by the victors – but where there's victory, there's also defeat. The aspect of being defeated is the subject of a new historical research project which began this winter semester, titled 'Suffer, Reinterpret, Conceal and Forget. Defeats and Losses as Phenomena of an Expanded Military History of the Roman Imperial Period'. 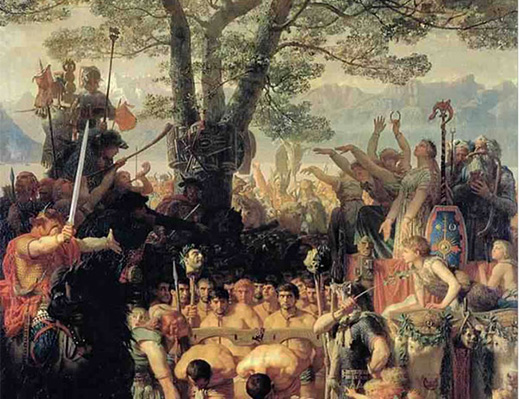 Charles Gleyre, 'The Romans Passing Under the Yoke', oil on canvas, 1858

The project examines how the Roman empire dealt with defeats and losses, how these collective coping strategies influenced the ruling elites and society at large – and how they were historiographically reflected. The project is funded by the German Research Foundation (DFG) for a period of three years.

'In concrete terms, this project will search for patterns and strategies that appear in the sources when dealing with Roman defeats, losses and losers,' explained Oliver Stoll, Professor of Ancient History at the University of Passau and Principal Investigator for the research project. 'Above all, the historiography of the Roman imperial period is to be examined to see what reasons, interpretations or explanations are given there for suffering a defeat and whether – and in what ways – these are part of narrative strategies.' The team of researchers will also pick out singular phenomena, such as 'death for the state' or 'captivity'. 'The project is intended to show how Rome dealt with its own war dead and prisoners. The direct effects of a defeat on the army are also taken into consideration, such as mutinies, disturbances or traumata,' said Professor Stoll. The researchers will, moreover, examine whether Roman defeats led to a change in political strategies, and whether there were social repercussions resulting from the defeats and losses in the course of military conflicts that caused lasting changes to Rome's society and elite.

Furthermore, the effect of defeats on Roman collective memory will be analysed to give an answer to 'whether there was a place for defeats in Roman remembrance culture. Was the memory of these fateful days preserved?', asked Oliver Stoll. Finally, a cultural historical comparison with ancient Greek city-states will be carried out as part of the project to reveal which repercussions and strategies were unique to the Roman context, and in what ways Roman culture or Rome's political culture determined how the populace would come to terms with defeats on the battlefield. 'In the end we will arrive at a theory of Roman defeat that takes into account the culture, society and political system of ancient Rome and contextualises the phenomenon.'