He already holds honorary doctorates from the Sorbonne in Paris, the University of Antwerp and Erasmus University Rotterdam – as of 7 June, Professor Donald C. Hambrick of The Pennsylvania State University also holds an honorary doctorate from the School of Business, Economics and Information Systems at the University of Passau, Germany. Professor Hambrick is the originator of the Upper Echelons Theory, one of the most influential streams of research in management science. He is considered an eminent scholar throughout the world. The festive award ceremony took place in the picturesque Neuburg Castle and was embedded into a concert performed by the acclaimed violin virtuoso Christine-Maria Höller, award-winning pianist Keiko Hattori, and the renowned baroque trumpet ensemble Schwanthaler Trompetenconsort. 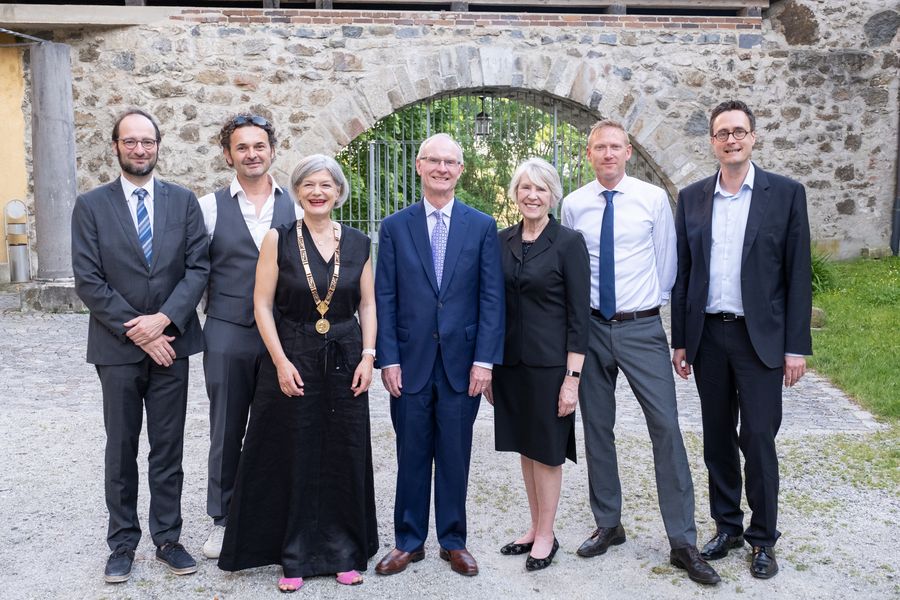 The award ceremony took place directly after the conclusion of the 10th EIASM Workshop on Top Management Teams and Business Strategy Research, which was hosted by the University of Passau on June 6 and 7 in co-operation with the Brussels-based European Institute for Advanced Studies in Management (EIASM), a science network.

Professor Hambrick is Evan Pugh University Professor and the Smeal Chaired Professor of Management at Smeal College of Business at The Pennsylvania State University. His research focuses on the question of how top executives’ attributes, such as their personalities, experiences, and values, affect the actions and the success of the companies they lead. Professor Hambrick has authored numerous seminal scholarly papers as well as several books of great relevance to practitioners, for instance, ‘Navigating Change: How CEOs, Top Teams, and Boards Steer Transformation.’ An acknowledged leader in his field, Don Hambrick has been a member of the Board of the Strategic Management Society and President of the Academy of Management – the world's leading society for management scholars. He has served on the editorial boards of virtually all major academic journals in his field and is one of a very small group of scholars to receive both lifetime achievement awards of the Academy of Management: the Distinguished Scholar Award and the Distinguished Educator Award.

In her speech, University President Carola Jungwirth praised Professor Hambrick: ‘Your astounding academic achievements, your work with upcoming scholars and your service to the academic community are a role model and an inspiration to all of us.’ She added: ‘We are grateful and extremely glad to have the opportunity to award you for being such a role model and to celebrate you tonight.’ The University President pointed out parallels between Hambrick’s research and the mission statement of the University of Passau, saying that across all disciplines and faculties, ‘we deeply share the idea that what we teach, and how we teach, and how we create a community affects those entrusted to us: our students.’ Universities like ours, after all, ‘shape future leaders – who they are and what they become.’

Her speech was followed by a welcome address from Professor Michael Grimm, the Dean of the School of Business, Economics and Information Systems. He welcomed the 100 invited guests, introduced the historical setting of the ceremony and outlined the program for the evening, a festive concert in honour of Professor Hambrick. The concert included baroque trumpet music for the Royal Courts of Wittelsbach in Munich and Thurn und Taxis in Regensburg; a Flamenco Fantasy for Violin Solo by Aleksey Igudesman; an arrangement of Leonard Bernstein’s West Side Story Suite for Violin and Piano – encompassing the songs ‘America’ and ‘Somewhere’; and the especially romantic and challenging Sonata for Violin and Piano in E flat Major by Richard Strauss.

Andreas König, Chair of Strategic Management, Innovation and Entrepreneurship, delivered an especially personal laudatory speech. He highlighted Donald Hambrick’s eminence as ‘one of the most influential management researchers of the past four decades – well beyond the field of management itself.’ He emphasised that ‘Don Hambrick’s Upper Echelons Theory constitutes one of the most significant contributions to the field of management and organizational research of the last four decades.’ As König pointed out, the notion that, over time, organizations become mirrors of the characteristics of their top executives, fundamentally changed management and organizational research, which until the late 1970s had been dominated by structuralist approaches.

König affirmed that ‘Professor Hambrick’s research in the scientific community is regarded as exemplary not only because of its theoretical rigor, creativity, and methodological skill, but certainly also because of its exceptional beauty in scholarly writing.’ König continued: ‘We should also appreciate Professor Hambrick’s very special didactic gift and his selfless dedication to his students. Many of them are now leading management scholars – not only in the United States, but also in other countries.’ König concluded his speech with the heartfelt words: ‘Clearly, I would not be standing here either if it wasn’t for you.’