Upon nomination by its Faculty of Economics and Business, Professor Ursula Reutner (Chair of Romance Languages and Cultures) was awarded the coveted doctorate honoris causa of Universidad del Salvador (USAL) in Buenos Aires, Argentina. USAL’s academic leadership lauded her exceptional research on intercultural communication and her considerable contributions to the promotion of international collaboration. Ursula Reutner is the first person to receive an honorary doctorate from USAL's Facultad de Sciencias Económicas y Empresariales and one of only a few women to receive this accolade from the Jesuit university; she is also the first female professor of the University of Passau to have had an honorary doctorate bestowed on her. 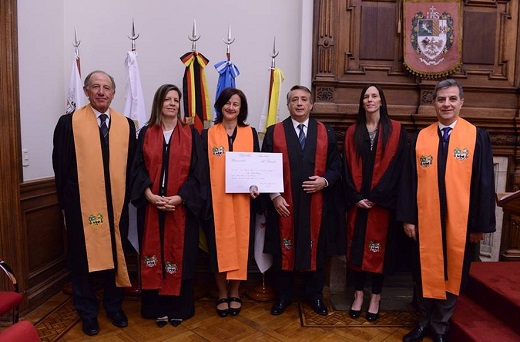 Universidad del Salvador maintains close links to the University of Passau, including a double-degree programme for students enrolled in Passau’s B.A. International Cultural and Business Studies programme – the first bachelor's programme in Germany to offer a double degree option with an Argentine university. The double degree programme was established in 2009 under the auspices of Professor Ursula Reutner, who continues to direct the programme to this day.

The award ceremony followed the medieval rites of Spanish universities: First, the rector, pro-rectors, the dean and Ursula Reutner entered the hall to the hymn of St. Ignatius of Loyola, dressed in academic robes and sashes of different colours symbolising the individual academic disciplines. Following the entrance, flag bearers brought the German and Argentine flags and both national anthems were sung. In his laudatory speech the Dean of the Faculty, Hector Francisco Dama, praised the great quality and global significance of Ursula Reutner’s research as well as her exceptional achievements in the area of international co-operation.

In her acceptance speech, Ursula Reutner gave a comprehensive overview of the cultural history of taboos, specifically on how the usage of euphemisms in the Spanish language has changed over time. The speech touched upon the prohibition of mentioning the name of God and the devil, which is rooted in religion and magical thinking; the  taboos concerning the human body and its functions, which arose in the Renaissance period; and of course modern-day political correctness and obfuscations in the context of war and business. One particular focus of her lecture was on the linguistic work of the Jesuit Order. She concluded: 'Language is never artless; it always conveys information on the regional, chronological or ideological position of the speaker'. It can be used to manipulate others but also – as was Ursula Reutner's motive here – to show respect and tactfulness.

After her speech, Professor Reutner was presented with an engraved medal and the honorary doctoral certificate, and was honoured by a second eulogy delivered by the Rector of Universidad del Salvador. The award ceremony was attended by members of the university, representatives of German companies with dependencies in Argentina, the German-Argentine chamber of commerce and industry, the German embassy and German schools.