In Times Higher Education's (THE) latest Subject Ranking for Business and Economics, Passau's School of Business, Economics and Information Systems was found to be among the best 201–250 business schools throughout the world. Year-on-year the faculty climbed 150 places despite the considerably larger number of schools and faculties included in the ranking. 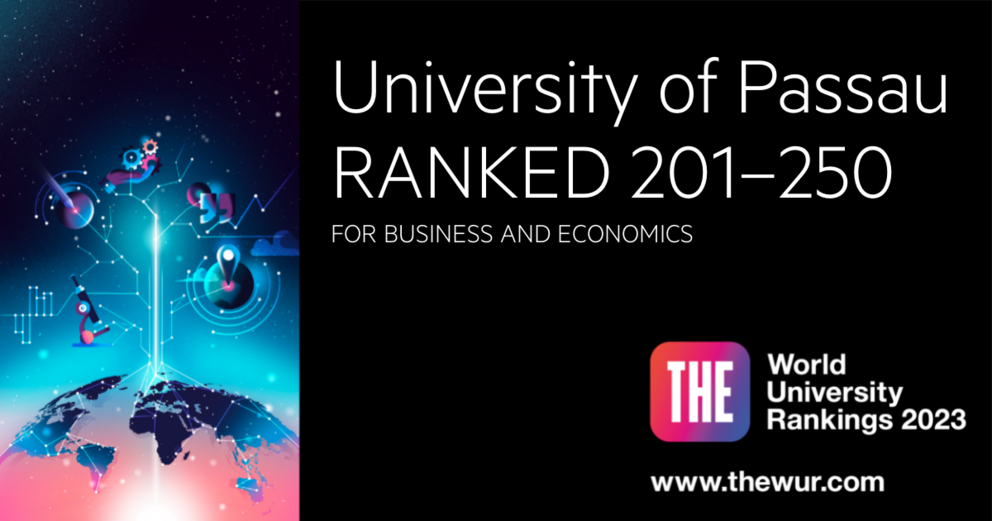 The Dean of the University's School of Business, Economics and Information Systems, Professor Jan H. Schumann, said: "I am very proud of our school’s performance. As part of a very young university, we have prevailed in both the national and international competition. In Germany, we play in the same league as the universities of Cologne and Hamburg, and internationally we are on a par with very renowned universities such as Queen Mary University London, the University of Strathclyde and the University of Pittsburgh." The rise in the rankings is the result of a concerted effort by the entire faculty, which brought about significant improvements, particularly in the areas of citations of research papers and internationalisation. "We will be able to intensify our research activities over the coming years with the help of new colleagues with strong research track records who have recently joined us, and will also benefit greatly from the DFG Research Training Group 'Digital Platform Ecosystems' that is currently just getting started”, said Professor Schumann.

The 2023 Subject Ranking for Business and Economics is once again led by the Massachusetts Institute of Technology (USA). In second and third place are Stanford University (USA) and Oxford University (UK). The best continental European university in the field of Business and Economics is ETH Zurich (Switzerland, 16th place), while the highest-ranked Germany university is TU Munich (33rd place).

About the Times Higher Education Rankings

The THE Rankings are among of the most influential worldwide university rankings, and the number of participating universities have grown steadily every year since 2011; in the latest survey period of the THE World University Ranking there were 1,799 universities. Of all the universities offering business and economics courses, the 870 faculties with the highest number of publications qualified for the subject ranking "Business and Economics" this year.

The ranking is constructed on a comparison of 13 different indicators from the areas of research, teaching, knowledge transfer and internationalisation. Some of the data, above all indicators on the student body, staff figures and financial resources are reported by the participating universities themselves, while others are obtained from academic databases and THE-conducted surveys among international academics.

For further details visit the THE subject ranking website.