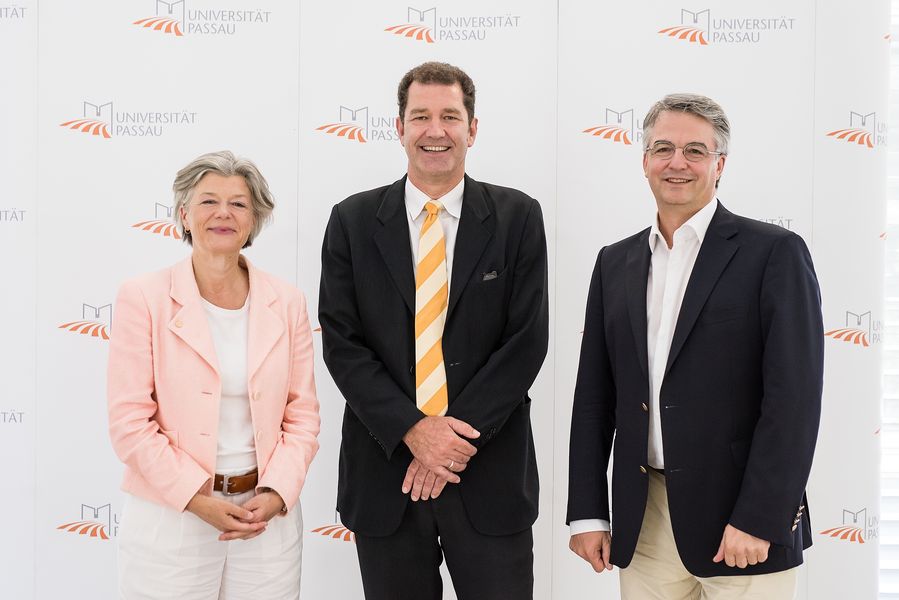 The vote was taken by the University Council at its most recent meeting on 19 July. Jörg Fedtke, who holds the Chair of Common Law (Faculty of Law), accepted the vote. As Vice President for Quality Management and Diversity, he will be responsible for the strategic development of the University's quality management structures and the formulation of a diversity concept – both crucial areas for the further internationalisation of the University of Passau.

Jörg Fedtke studied Law and Political Science at the University of Hamburg. After earning his Ph.D. summa cum laude in 2000 at the Institute for International Affairs (Professor Ingo von Münch), Jörg Fedtke worked at the University of Hamburg, at University College London and the Institute of Global Law in London (UK) as well as the University of Texas at Austin (USA). Before accepting the newly-established Chair of Common Law in Passau in May 2014, he was a tenured A. N. Yiannopoulos Professor in Comparative and International Law at Tulane Law School in New Orleans, Louisiana (USA). At Tulane, he was Co-Director of the Eason-Weinmann Center for Comparative and International Law and Co-Director of the Tulane-Humboldt Berlin Summer Program in Intercultural Negotiation, Mediation and Arbitration. Professor Fedtke continues to serve at Tulane in a part-time capacity. Professor Fedtke has advised members of the Iraqi National Assembly on issues of federalism, judicial review and human rights protection during the country's constitutional re-orientation after 2005. He has served as a foreign expert for UN- and EU-funded projects on various aspects of constitutionalism in the Arab region on a number of occasions. Furthermore, he was a key advisor to the initiative ‘Kirkuk and Beyond – Strengthening Multi-Level Governance and Service Provision in a Challenging Environment’ funded by the German Foreign Office in Iraq (2010–13) and assisted the International Institute for Democracy and Electoral Assistance (IDEA) on missions to support the constitution drafting processes in Tunisia, Egypt and Libya. Aside from working as an expert on constitutional developments in the Middle East, Professor Fedtke has been involved in collaborative research for the European Commission and the French Court of Cassation, and has given expert evidence to the House of Lords Select Committee on the Constitution in the United Kingdom (data protection and related questions of privacy). Professor Fedtke also acted as a key consultant for The Carter Center’s field office in Egypt during the constitutional revision process in early 2014 and provided a report on constitutional developments in the Arab region to the European Parliament’s Committee for Foreign Affairs later that year.

Professor Rainer Wernsmann has held the Chair of Constitutional, Administrative, Public Finance and Tax Law since 2006, serving as Vice Dean and later Dean of the Faculty of Law from 2010 to 2012. Since April 2014, he has been Vice President for Teaching and Study and Deputy President of the University of Passau. Now in his second term, he will leave office ahead of time to represent the Faculty of Law in the Senate of the University of Passau.

Carola Jungwirth said: 'I am greatly indebted to my colleague Rainer Wernsmann for his constructive and reliable work within the University Executive. I am pleased that he will continue to shape the future of the University of Passau as the Senate representative for the professoriate of the Faculty of Law.'

The vacant post of Vice President for Teaching and Study will be advertised on 1 April 2018. Vice President Harry Haupt (Research and the Advancement of Early Career Researchers) will take over as Deputy President when Professor Wernsmann leaves office.